And, some more myrmecophiles from Sat.

Camponotus were preparing for colonial proliferation.

Some case-bearing leaf beetles can be found with ants, where they feed on nest refuse. I’ve previously collected adults and larvae from Arizona, Arkansas and Oregon. The ones from Arizona and Oregon were in the genus Saxinis. 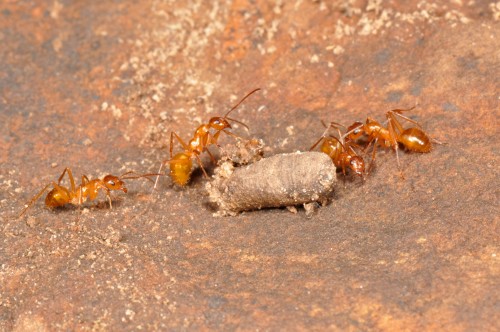 I kept them alive. We’ll have wait and see what the adults look like. 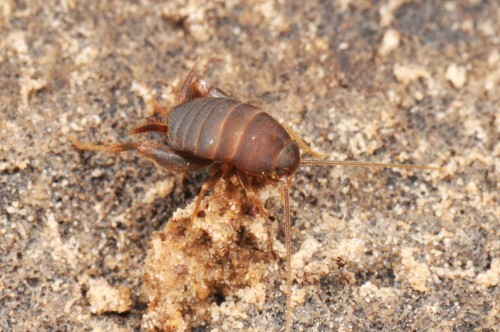 An immature female, you can see her still-developing ovipositor.

The current revision that treats North American taxa, in my opinion, is not that reliable. I don’t think hind leg spine number is a stable enough character to be used in identification. I have seen taxa with unequal numbers between their hind legs. I think molecular data will give us an entirely new perspective, just as the research in Japan has. I suspect this is what people call Myrmecophilus pergandei. 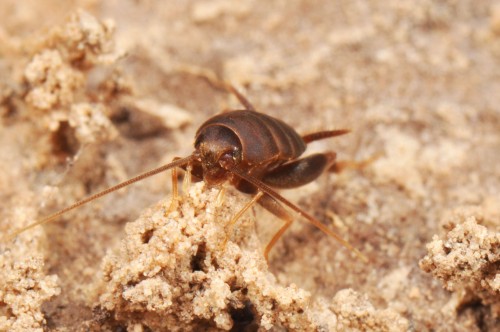 There is some evidence to suggest that individuals develop according to the size of their hosts. Therefore, some species are known to demonstrate extreme size polymorphism. Could this really be the reason behind these observations?

The female yesterday was a little teneral. The ones today are fully pigmented, and look, an immature! 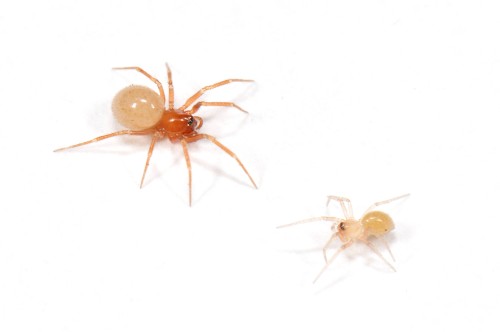 About a year ago I blogged about how I had started collecting a species of linyphiid spider with Formica ants that nest in my front yard. I left the post open ended, hoping that someone would have an idea of what the spider species might have been. I was picking up multiple life stages, both sexes and had accumulated over 40 specimens over the course of the field season. Given these statistics, it was hard for me to believe that these spiders were accidentally occurring with ants and became convinced these spiders were myrmecophilous. 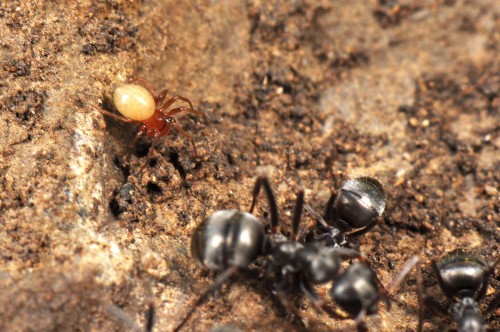 A mature female Masoncus sp. wanders among its hosts.

At the time little did I know that I was to receive an email informing me that the spider may belong to the genus Masoncus and was directed to the research of Paula Cushing. She worked with a, at the time, new species of Masoncus that occurred with Pogonomyrmex in southeastern USA. Observations revealed that these spiders follow host trail pheromones to accompany host nest site switches. I contacted Paula and we believe that the species in my yard might be a new species, which had also been collected recently in Wisconsin. 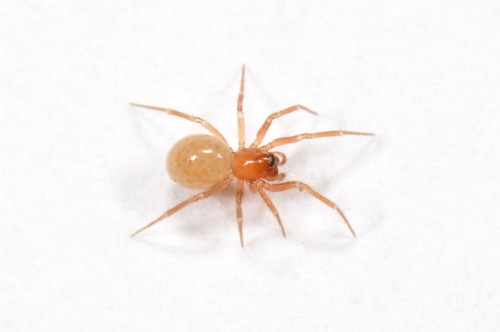 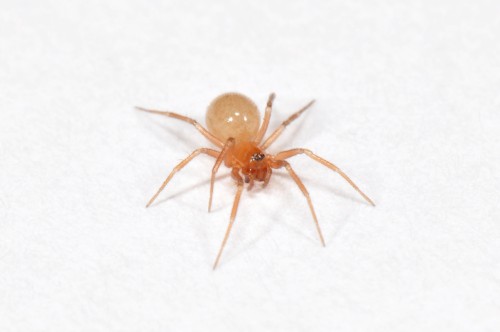 Several of us are now working together to further understand the biology of Masoncus in relation to its hosts. As a part of this objective, we are currently accumulating material for gas chromatography-mass spectrometry (GC-MS) to compare guest and host cuticular hydrocarbon profiles (CHC). These spiders wander the nests freely, undetected, and may be acquiring CHCs from their hosts either passively or actively, essentially camouflaging themselves among the ants. On the flip side, these spiders may just “have no smell.” These are both commonly employed strategies to infiltrate ant colonies among arthropods. Either way, the GC-MS should tell us more.

TA meeting, applied for money, reviewed a manuscript… Before I continue on with more pressing tasks, here are a couple more mini-clavs. These are from the KU collections. 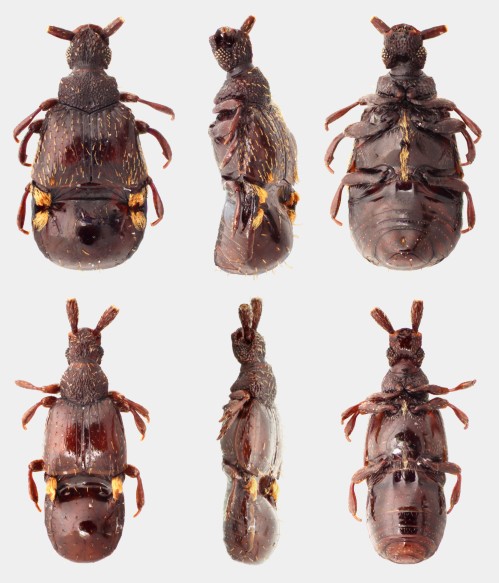 And, something to stimulate your auditory senses while these little guys blow your visual fuse box.

Oh, and next time your lab gets dry ice.

As a reader of my blog, you’re probably already aware of symbioses with social insect. What does this mean? Well, social insects (think ants, termites, bees, etc.), just like our societies, can become infested with freeloaders – basically, pests – we have rats and ants have beetles that also scavenge on leftovers.

Some object, but I think that drawing analogies between economics and evolutionary theory can be a fun and insightful exercise, so here I go: In economics, there is this idea that the number of loopholes (e.g. number of ways to cheat your taxes) in a system increases with complexity.

Once you’ve decoded the social system of your host(s), it’s a pretty easy ride: air-conditioned accommodation, an extreme concentration of energy, and protection from enemies. But scientists have been struggling to figure out just how you get to a point where you are truly integrated in the host’s societies.

Rove beetles have left all other insects in the dust when it comes to symbiosis with social insects. In particular, the Aleocharinae and Pselaphinae stand out as “evolutionary success stories.” Interestingly, the two groups couldn’t look more different. Aleocharinae are elongate and flimsy (my specialty), while the Pselaphinae are compactly formed tanks of a beetle (Joe’s specialty). This might mean two things: 1) the Aleocharinae retain abdominal flexibility which can allow for gross morphological redesign in contrast to the Pselaphinae, which seem to have given up that option; 2) the Pselaphinae are tanks, their tough, and a few attacks from a host aren’t going to be detrimental – a stark contrast to a flimsy Aleocharinae. 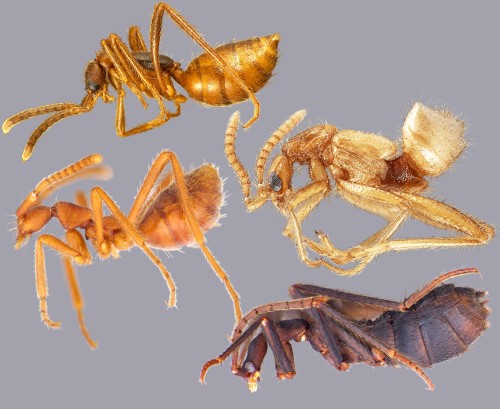 What does that mean? Well, it seems that Pselaphinae, although they’ve given up the ability to drastically rearrange their abdominal morphology as an adaptive strategy for living with social insect colonies, have bought themselves a different entry pass into the nests of ants and termites. Again, Pselaphinae are tough. As long as they can withstand a few attacks here and there, given some time in the nest, adaptations present or not, you’ll start to pick up host colony odors.

Nest-mate recognition in social insects appear to depend heavily on “colony odors” in the form of unique cuticular hydrocarbon profiles. These hydrocarbons, like all compounds, express some amount of volatility ~ kinda like smelling like Indian food after you’ve left the place. You take this a step further and you can imagine the evolution of structures and/or behaviors that optimize ability to pick up host colony smells, and become, for all intents and purposes, invisible to those around you. Toughness, in evolutionary time might prove to be one of a few options for entering into social insect symbiosis.

Blah, blah, blah; sorry, I know that was long up to now, but I really wanted to set the stage so that YOU, the reader, can truly appreciate the videos that follow.

Why? Well I’ll let this quote from a Senegalese conservationist, Baba Dioum give it to you straight.

And I hope that we can preserve these evolutionary miracles for the future – because they are so awesome!

The following videos were taken and sent to me by my friend, colleague and developmental/evolutionary biologist extraordinaire Joseph Parker at Columbia U., which got us discussing their amazingness and we couldn’t resist sharing. Videos today concern two stars form the Pselaphinae: Harmophorus and Batraxis. The two genera are both faculitative symbionts, although Batraxis seems to have inched a little closer to an obligation to its myrmecophilous way of life. In addition, Batraxis seems to be “invisible” to their host ant while Harmophorus is not entirely so – possibly corroborating my previous statement.

Harmophorus with its usual host (above). The ants are aware of Harmophorus‘ presence and attack here and there, but thanks to the beetle’s hard exterior and compact body, very little, if not any damage seems to have been inflicted.

Batraxis and its natural host (above). Notice that the ants don’t even seem to realize their presence.

Look what happens when we switch the host ants between Batraxis and Harmophorus. While Batraxis (above) walks around unmolested by their novel host, Harmophorus (bottom) is being absolutely pummeled. Although, again, thanks to the Harmophorus‘ robust nature, seems to be OK despite the many bites and stings.

For Joe and I, this was a p-scientific way of demonstrating the possibility of an ecological transitional series from free-living to social insect symbiosis. Can’t you imagine a beetle like Harmophorus, beginning to demonstrate a propensity to live with ants, → evolving some better strategies for colonial integration (e.g. Batraxis), → until “perfecting” the art as the clavigerines have.

Difficult to test, definitely. We’ll need observational, phylogenetic and experimental data in order to begin to weave a supported story. But, the evolutionary magnificent these organisms display! I would gladly give my life studying them, even if it means merely discovering the corner pieces to a puzzle for which its dimensions remain a mystery.