Leptochirus is a relatively speciose group of subcorticular (inhabits the narrow space between the wood and bark of woody plants) Osoriinae (a.k.a. hotdog-staphlyinids: do to the nature of the cylindrical abdomen made up of the fusion of the, usually seperate, upper and lower plates).

These beetles may be found in small groups, often containing a group of closely aged young and pupae. Drawing paralels with passalid beetles, some people have speculated that these groups could represent small family groups. You can’t deny some morphological similarities with passalids either. Those strongly dentate square-ish mandibles are awfully similar, possibly due to similar habits?

With a little over 30 species, Homalolinus is a predominantly Central American Xantholinini that inhabits subcorticular habitats (lives under bark of dead trees). I have found that fermenting, gooey subcortex is best, and this statement goes for other staphylinoids as well. Several genera/species of Hydrophilidae and aleocharine staphylinids such as Diestota are quite abundant under the bark of of trees undergoing some fermentation. 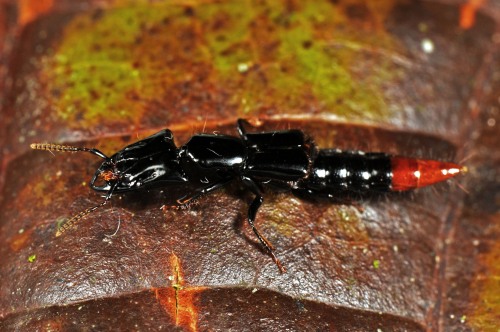